‍Frozen Shoulder affects 2% of the population at some time in their life. In people with diabetes, up to 20% may develop Frozen Shoulder.

Frozen Shoulder is a condition that may occur spontaneously without apparent cause, or it may come on after an injury or surgery to the shoulder. The disease starts as an inflammation of the capsule of the shoulder. All joints in your body have a joint capsule. The capsule is a flexible thin membrane that lines the shoulder joint. This inflammation is painful, and patients often experience severe aching pain, which can keep them awake at night. The shoulder may be diagnosed as suffering from impingement because, at this early stage in the disease process, the two conditions appear very similar.

After some months of the capsule being inflamed, the shoulder becomes stiff. The stiffness occurs as the capsule thickens and becomes fibrotic as a response to the inflammation of the capsule. At this point, the joint is painful and stiff, which is particularly unpleasant. Eventually, the condition resolves entirely of its own accord. However, it may take one to two years to resolve, sometimes longer.

Due to the common relationship with diabetes, I recommend to patients that if they have Frozen Shoulder or think you might, it is advisable that they ask their GP about testing for diabetes. A simple, fasting blood glucose test is usually adequate.

The pain of Frozen Shoulder is due to the inflammation of the shoulder joint capsule and tends to be exacerbated by movements that stretch the capsule. For the pain, a cortisone injection placed into the shoulder joint (the glenohumeral joint, not the bursa) can be beneficial in settling down the inflammation and helping ease the pain and discomfort. The injection contains cortisone and local anaesthetic. The local anaesthetic will ease the shoulder pain for the first few hours after the administration of the dose. This initial relief of the shoulder pain due to the local anaesthetic gives further evidence to support the diagnosis of your shoulder condition being a Frozen Shoulder.

There is some evidence suggesting that a cortisone injection into the shoulder joint (the glenohumeral joint) not only greatly helps with the aching pain of frozen Shoulder but that it reduces the length of time it takes for the condition to resolves. The injection helps shorten the time that Frozen Shoulder takes to get better. Hazleman and coauthors reported in the journal Rheumatology and Physical Medicine in 1972 that patients who receive the injection earlier in the course of the disease recovered more quickly. Dias and coauthors wrote in 2005 in the British Medical Journal (BMJ) that early treatment with a steroid injection into the intra-articular GH joint may reduce synovitis, thus shortening the natural history of the disease.

Sun and coauthors published a systematic review and meta-analysis of 8 randomised controlled trials, totalling 416 patients, in 2016 in the American Journal of Sports Medicine. They concluded that pain scores and passive range of motion were improved in the first 16 weeks and that the effects of a cortisone injection may last as long as 26 weeks.

The stiffness in the affected Shoulder is due to significant thickening, fibrosis and contracture that occurs in the shoulder capsule. The capsule is usually a thin pliable membrane. As the capsule becomes fibrous and contracts the ball of the shoulder joint (the humeral head) becomes tightly held and unable to move in the socket of the shoulder joint (the glenoid) severely restricting the range of motion of the Shoulder. The stiffness eventually resolves in all patients with Frozen Shoulder. Consequently, the initial recommendation to most patients is to allow it to resolve with time. 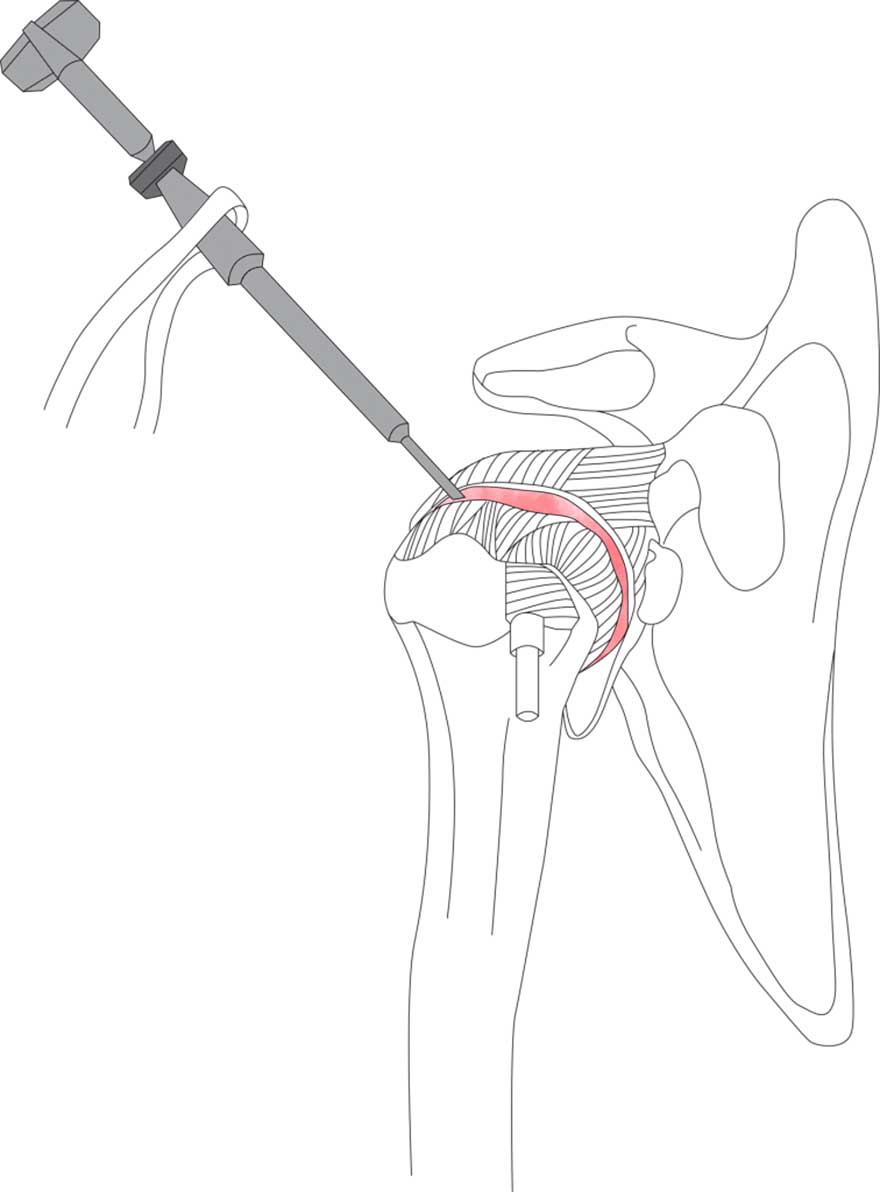 ‍Surgery is discussed with patients that are severely affected with stiffness and who are unable to wait for the Shoulder to resolve on its accord. It often takes several years for the frozen Shoulder to resolve and for some people that would mean not working nor doing their normal activities for that period, something that isn’t feasible for many people.

I perform arthroscopic shoulder release surgery for people that have severe stiffness due to Frozen Shoulder. I perform a complete 360° release of the shoulder capsule, releasing the ball of the shoulder joint from the socket so that the shoulder joint can move again. This surgery is effective in restoring motion to the Shoulder. Performing a 360° release of the Shoulder restores 70% to 80% of the range of motion to the Shoulder immediately postop with the remaining range of motion returning as the frozen shoulder condition eventually burns itself out.

The original method of releasing a frozen shoulder was to divide only part of the capsule that was most severely affected. The whole capsule was not released due to concern that a more extensive release might precipitate shoulder instability. Since I first started performing the more extensive 360° release, I have followed every patient I have performed the procedure on as part of an ethics approved research project. In over 80 patients, I have not seen any complications of the procedure, and I reliably see patients regain about 70 to 80% of their range of motion immediately following the surgery. Out of all the operations I follow as part of my research interests; this operation has the highest patient-reported satisfaction scores.

Dattani and coauthors published a paper in the Bone and Joint Journal in 2013 looking at 100 patients, who had failed non-operative management, treated in the stiffness-predominant phase with an arthroscopic 360° capsular release. They reported highly significant improvement in range of movement at 6 months postop.

‍Manipulation under Anaesthesia (MUA) is where the patient is given a general anaesthetic, and then their shoulder is forced until the capsule tears. The procedure is helpful for patients with Frozen Shoulder, particularly for patients who haven’t developed a severely thickened and fibrous capsule. However, my concern is that for patients with severe Frozen Shoulder, a lot of force has to be applied to get the capsule tear and the tear is uncontrolled.  Often even then it isn’t possible to obtain a successful release of the shoulder in all directions. The tearing of the capsule is uncontrolled compared to a clean surgical incision of the capsule performed under direct vision at arthroscopy.

‍As we don’t know what causes Frozen Shoulder treatment is aimed at the symptoms; pain and stiffness. For the pain, a cortisone injection into the shoulder joint is very effective in reducing the pain and may speed the resolution of the condition. The stiffness will eventually resolve of its own accord. However, it takes several years for this to occur and for some people that would mean that they couldn’t work nor do their usual recreational activities and sports. In people who are severely affected by Frozen Shoulder, I discuss with them an arthroscopic release. In this surgery, I perform a complete 360° release of the capsule which releases the ball of the shoulder joint (the humeral head) from where the contracted capsule has rigidly held it in the socket of the shoulder joint (the glenoid) unable to move so that movement can occur again. This reliably restores 70 to 80% of the motion to the shoulder joint immediately with the remaining movement returning as the Frozen Shoulder condition eventually burns itself out. This procedure is safe and has high patient satisfaction rates.