The argument against the degenerate tendon theory is that calcium is in fact more commonly seen in more normal looking tendon rather than tendons with significant tears.
‍
STAGES
‍
Several stages of calcific tendonitis are described. There appears to be some initial change in the fibrocartilage cells within the tendon that allows calcium to be deposited within the tendon. This precalcific stage is followed by a calcific formative stage in which chalky calcium deposits form. This stage tends to be a chronic, painless stage. This is different to the resorptive stage, in which the body mounts an inflammatory reaction to the calcium. Macrophages from the blood stream react to the calcium and start to reabsorb the calcium deposit. The calcium lump becomes soft and toothpaste like due to the enzymes released by the macrophages. This stage is usually acutely painful.
‍
SYMPTOMS
‍
Patients with calcium in their rotator cuff tendons may be entirely asymptomatic.  They may present with mild to moderate chronic pain and discomfort in their shoulder or they may develop acute severe pain in the shoulder related to the inflammatory reaction against the calcium deposit as the body tries to reabsorb it.

Pain is typically felt down the side of the upper arm.  The shoulder tends to ache at night time.  Pain is often felt as the arm is lifted overhead with the swollen area of tendon catching on the under surface of the acromion and impinging.
‍
DIAGNOSIS
‍
X-Rays shows the deposited calcium very well. However, several views will need to be taken to be certain to demonstrate it. X-Rays need to be taken with the arm in neutral rotation and in internal and external rotation.

Ultrasound is particularly sensitive to calcium and will invariably demonstrate it. 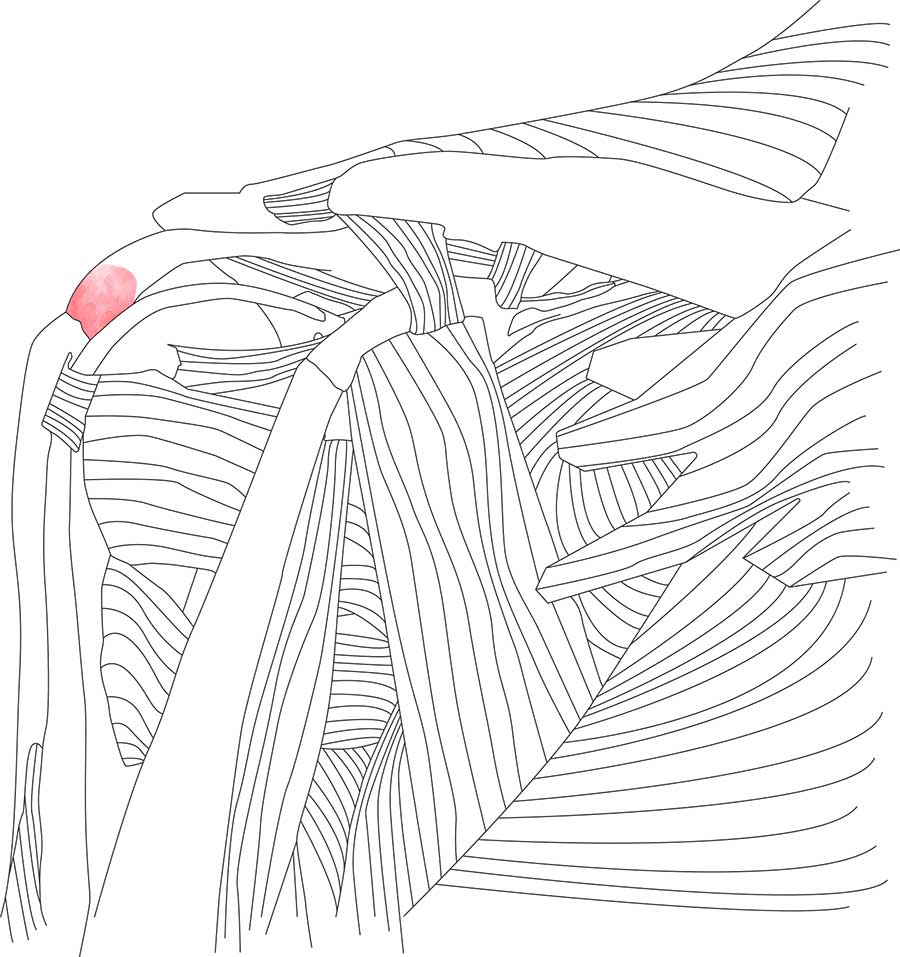 Non-operative
‍
Steroid injections to the subacromial space and some physiotherapy are often very helpful in relieving the symptoms. However, to prevent the symptoms recurring it is usually necessary to remove the calcium from the rotator cuff tendon.

The calcium can be removed by needle aspiration. A large bore needle is inserted into the calcium deposit under ultrasound guidance by a radiologist and if the deposit is soft it is often possible to aspirate it. A steroid injection is given at the same time into the subacromial space. Needle aspiration tends to be successful in about 50% of cases. However, the results depend most on whether the lump of calcium is hard or soft. This technique is not particularly successful if the calcific deposit is a hard-chalky deposit. The calcium is more likely to be hard and chalky if the symptoms have been present for a long period of time and are of a mild to moderate severity. Calcium deposits are more likely to be soft and toothpaste like in nature if the symptoms have been present for a short period of time such as days to weeks and if they have started fairly suddenly and are more severe. There is no way to be certain prior to needling or surgery whether the deposit is hard or soft.

Minor discomfort and soreness can be expected in the shoulder following a needle aspiration.
‍
Surgery
‍
The calcium can also be removed surgically. This is done arthroscopically with keyhole surgery. The region of tendon with the calcium inside it can usually be identified by the visualisation of an inflamed area of tendon. The location can be confirmed by probing the tendon with a needle until calcium is seen in the tip of the needle. Once the calcium is located, a small longitudinal incision is made in the tendon and the calcium removed with an arthroscopic shaver and curette. Often an acromioplasty is performed as well.